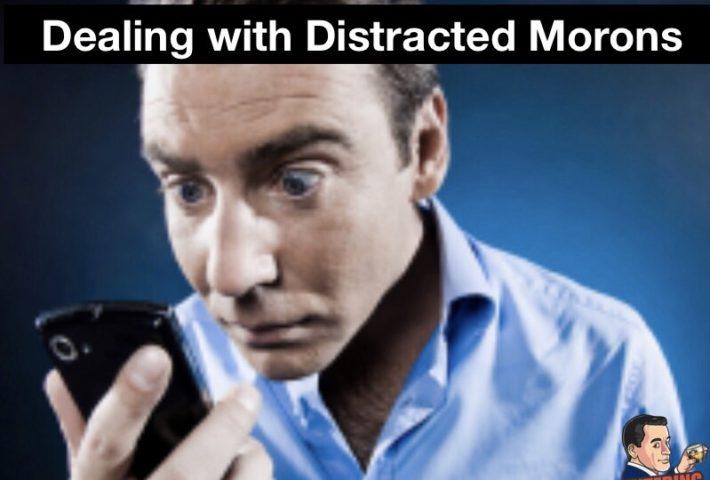 Today, as I was arriving at my apartment after a business trip, I got in the elevator with what I’d like to refer to as “distracted moron”. These morons seem to be multiplying their population at an exponential rate, as they’re more visible now than ever before. You’re probably asking yourself what a “distracted moron” is, and who qualifies for such an honor. This is a person so glued to their phone that they set themselves up for real challenges in the physical world. You may be wondering how to deal with morons in a distracted world? Read on.

YouTube has hundreds of videos showing people so focused on their mobile phone that they actually fall into fountains, walk into signs, and sometimes even die. For some strange reason, these people believe that their text, email, Facebook feed, or selfie are more important than functioning safely and efficiently in real life. They have never attempted to develop the discipline to look away; they’re hooked on the dopamine.

At least once a month I read a news story about a person (or couple) that died falling off something really high just for the sake of getting a cool picture to post on Instagram. Not only is this dumb and unsafe, but it literally flips the core principles of “survival of the fittest” on its head.

Survival of the fittest involves doing whatever is necessary to adapt to your environment in order to survive. Instead, these distracted morons are willingly acting in ways that jeopardize their survival for something as meaningless as social media likes! It’s possible they didn’t even consider the possibility of harming themselves or ending their lives by focusing on the wrong things, which just makes them dumb.

If they did in fact weigh the pros and cons, their ability to analyze and reason is broken, and their priorities are completely fucked. Anyone that fails to see the fundamental flaws in this type of behavior has something seriously wrong with them.

Consider this: Research has shown more people than ever are putting themselves at risk of injury due to being glued to their cell phones. Around 41 per cent of people say they have had a technology-related mishap, according to new figures collated for Accident Awareness Week. This number rose to 84 per cent among 16 to 24-year-olds. 13 per cent of people have walked into someone or something while checking their mobile phone, with the figure rising to 43 per cent for younger generations. Math supports the distracted morons theory.

Today I Had to Deal With Morons in the Elevator

Today, this particular distracted moron revealed themself to me in the most basic form. They got in the elevator, hit the button for their floor, and proceeded to bury their head in their cellphone. Okay, no big deal.

Maybe they have family issues going on, and this was their first chance to check their texts. It’s possible they had an urgent request for work to deal with and needed to read some emails. Who knows. I’m not blaming this moron for immediately immersing themself in their mobile device.

The verbal assault I’m about to unleash has everything to do with the fact that the moron missed their opportunity to get off on their floor because they weren’t paying attention. What’s worse is the moron then questioned ME, asking why I didn’t say something to them when we got to their floor. My response: “I’m not responsible for you being distracted “. Then silence.

Analyzing the Behavior of a Distracted Moron

This is comical on so many levels. I knew I wouldn’t have time to say all this, since I was set to get off the elevator a few seconds later, but what ran through my head probably would’ve had this person remembering this tongue lashing for the rest of their life.

First, isn’t your primary goal to reach your destination (your apartment)? How can you screw that up? Next, aren’t the lights and sounds of the elevator enough to get your attention? After pushing the button, did you just decide to completely “check out” on the world? Say if I happened to be a shady person, preparing to rob or assault you? Since you lack total awareness, you would be an easy mark. Still, people get distracted for a variety of reasons. Nobody is perfect. I get it!

When you make a clumsy mistake, do not blame anyone else but yourself. To the woman in the elevator: do not assume I had nothing better to do than be your guide on your fantastic elevator voyage. Don’t make the assumption that the emails I was checking on my phone were not as important as whatever business you had on your phone. It’s never my responsibility to pay attention on your behalf. How can you be this self-centered and so dumb? If you make a mistake, it’s nobody’s fault but your own.

Deal With Morons Glued to Phones

Our society is so quick to point the finger at other people that many defer accountability for even the most basic things. Unpack this elevator interaction and realize the serious flaws many people have in their worldviews. Ignorantly, they believe to be the center of the universe, oblivious to those around them, This It’s time for people to take a stand against it; but how?

Start calling people out when they try to blame others for their mistakes. If someone is doing something moronic, showing that they have no regard for other human beings, say something. If you follow former pro NHLer Sean Avery on Instagram, you will see him do this several times per week in the streets of New York. Comical, raw and absolutely logical. Just don’t break the law in pursuit of this righteous path!

Be honest and blunt. Make them feel a little uncomfortable an there’s a chance they will connect that feeling with their moronic behavior, conditioning them to change their behavior. Maybe, you will make them think twice about the way they carry themselves.

How to Deal With Morons in a Distracted World