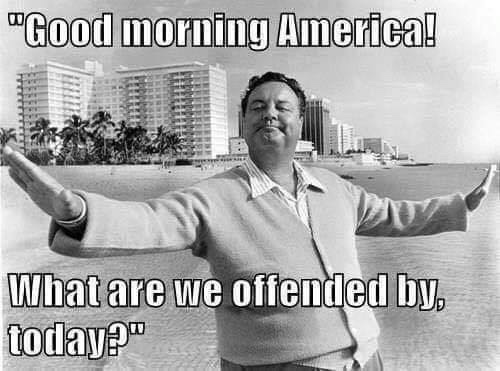 They’re trying to cancel Joe Rogan for things he said on his podcasts years ago. Dwayne Johnson, formerly known as “The Rock”, interjected on Twitter, first defending Rogan and then doing a one eighty and attacking his former friend after the woke mob came after him. Naturally, Twitter dug up some of his old tweets and videos, leading many to call him “transphobic” and “racist” among other things.

How dumb. Nobody is perfect. Everyone has said or done something stupid in their past that, if were exposed to the masses, would piss lots of people off.

Some may read this article and comment about how we shouldn’t give a fuck about celebrities, but it’s really not about celebrities. It’s about the nature of the world we currently live in, and the threat it poses you, your livelihood, your reputation and your family. Unless you’re extremely wealthy and retired, someone can “cancel” you someday, even if you’ve done nothing wrong. One comment can be taken out of context and surfaced by woke lunatics, which can eventually surface to your employer and community.

They cancel you by putting societal pressure on large organizations (i.e. Spotify) to hurt you financially by firing you, and/or consequently silencing you by removing your platform to communicate. This could be as large scale as Donald Trump being banned from Twitter and Facebook, or as local as a schoolteacher being fired for using the “incorrect pronouns” when addressing a student.

The right to free speech is something America’s founding fathers gave their lives for centuries ago. It may not sound too important in the context of this conversation, but when you get to the heart of this issue and visualize it’s implications for the future of society, it’s one of the most fundamental rights we must protect at all costs. This right keeps us free and allows us to generate awareness, assemble in demonstrations of force, and think freely.

The financial harm caused by being canceled is one that could destroy your life. Not only would you lose the income you were counting on in your next paycheck, you would also be permanently labeled as a racist or bigot, harming your chances at future employment.

Information travels fast. A simple Google search of your name could reveal a news article proclaiming you were terminated for racist tweets. Whether or not it is actually true is debatable. Once the accusation has been made public, most people only see and remember the headline, as it is forever attached to your name in the search engine’s results. Good luck finding a new gig when Google is telling everyone you were accused of hating homosexuals.

So what do you do then? Either the bills don’t get paid, or you tap into your savings and investments just to get by while you scramble to reinvent yourself and find new work. You’ll likely have to take a lower paying job, changing your lifestyle and potentially harming your credit score if you can’t make ends meets. You could go into serious debt or declare bankruptcy. You’d lose the ability to support your family. It would cause tension and stress in your household, along with potential conflict and ostracism in your community. All because some asshole didn’t like something you once said today, last year, or a decade ago, and decided to tattle on you.

Recognize the fact that this behavior is totally designed to cause you harm. “Canceling” someone is an attack on your character and livelihood. It’s one step away from taking away your physical life and murdering you. They don’t want you to exist because you don’t agree with them, and instead of engaging you in hand to hand combat, they’re taking an alternative approach and attacking your livelihood and your good name. These are the actions of cowards, but unfortunately corporate America continues to support this nonsense.

To reduce the chances of it happening to you, take the following steps:

The world is increasingly moving to digital ecosystems, where everything is tracked and saved, making it close to impossible to maintain any sort of privacy. Start implementing these practices now to protect against future attacks on yourself and your family. The world needs strong men, not silenced men.