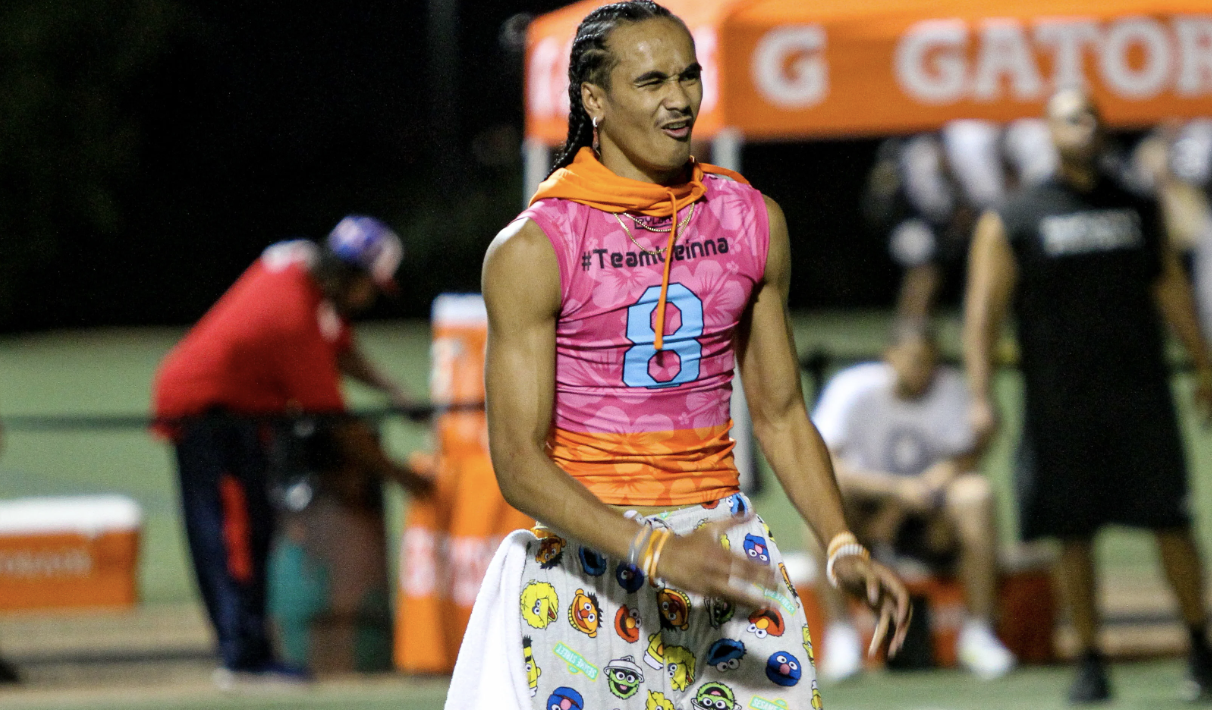 Despite being worth $8 million already, the teenaged Tennessee commit has decided Sesame Street pajama bottoms are best for tryouts. And social media is living for it. We’d normally forgive childlike fashion, primarily because performance should be the primary indicator of success (and we all have at least one pair of PJs that may or may not have a buttflap). But dude, dressing like this at a media appearance for D1 football? This is a national stage, not Walmart. Stop dressing like a child. Act like a man.

Alas, it shouldn’t come as a surprise. Celebrities, athletes, and public figures have long-since traded class for unkempt slothwear, and you can practically smell the worst offenders coming.

Men like Nico have zero standards or shame, and you’ll hear no critique from the soylent choirs of social media. The internet insta-recognized this guy’s Sesame swag – a platoon of effeminate manchildren and purple-haired orcs bootlicking metro-daddy’s latest outfit.

Five-star recruit or not, this is a problem. We’re not asking for a three-piece suit. We’re asking for a good example for those who look up to you; perhaps start by dressing like you aren’t still in diapers.

Men, your fashion is reflective of you and your masculinity. Comfort is one thing, but appearing destitute or pre-pubescent is another. Dress for success and earn the respect of your fellow man.

Another good example of where society is headed comes from Reddit, where a user dared post a lighthearted photo to the “Mildly Infuriating” subforum. It compared men’s fashion from 1910 to 2021:

The post suggests that modern masculinity has been, well, emasculated. It was unsurprisingly met with ire, reflective of the plague-ridden platform’s narrow worldview and audience mindset. A single comment was posted:

“That’s toxic masculinity for you,” we imagine the SJW bleating in retort. “Gender is a societal construct, so who are you to judge fashion?”

Listen up, Bozo. Turn back the clock a few millennia. Despite National Geographic trying its best to cherry pick for clickbait and say otherwise, men were hunters and women were gatherers. And irrespective of these differences, men and women evolved to walk upright. Men and women evolved to build entire civilizations. Men grew into their roles, and adopted standards. Women grew into their roles, and adopted standards. It’s not oppression. It’s the foundation and progression of a working society. You wouldn’t have a platform to bitch on had we, as a society, not built it.

Civilization is a delicate yet sustainable system that took centuries to actualize. Denying the cultural anthropology that led us to the modern world is just fucking ignorant.

Yet a generation of limp-wristed betas is trying their best to. And they can’t wait to undo it all and right the ship to ensure a trigger-free future of normalized buttplugs, legally protected pronouns, and Sesame Street sweatpants in public.