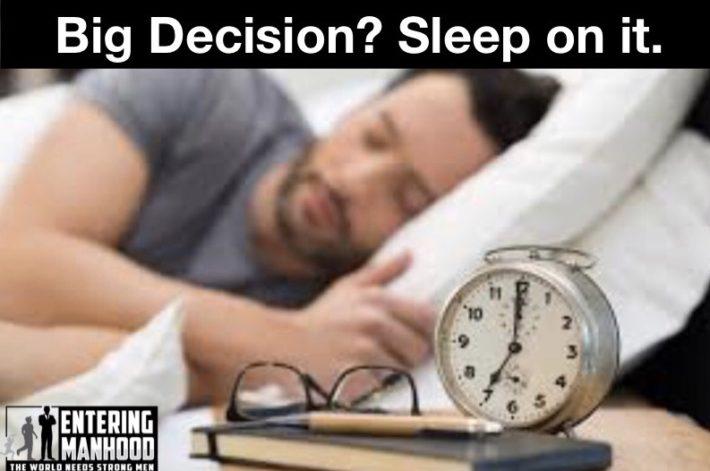 Old sayings are funny. Most of the time, people will repeat them without knowing the true meaning of why it became a saying in the first place. “Sleep on it” tends to be one of those phrases said by many, but understood by few. If more people understood the rationale behind the saying, logic would reign over impulse and people would be making better choices in life. No matter what the situation, if you’re ever asked to make an important decision, take the full twenty four hours of shut eye due to the biological benefits it creates. Here’s why sleeping on it helps make the best decisions.

Sleeping On It Is Biology

Why is it so important to get some sleep before making a big decision? We live busy, complicated lives that require us to juggle various responsibilities, all in a distracting world. It can feel impossible to find time for a few moments of peace to logically evaluate a major decision. Lucky for you, the human body has a built in function that handles this for you while you sleep.

That’s right; even when you’re sleeping like a baby, your brain is still working hard to help you organize your thoughts and solve complex problems. Sleep plays a housekeeping role that removes toxins in your brain that build up while you are awake. Think of it as sweeping away the trash as you sleep.

Conventional wisdom suggests that by “sleeping on it,” we clear our minds and relieve ourselves of the immediacy (and stress) of making a decision. Sleep also organizes our memories and helps us process the information we acquired during the day, helping us solve problems. New research (Dijksterhuis et al., 2009) suggests something else might also be at work — our unconscious.

Sometimes, the more consciously we think about a decision, the worse the decision made. We need a period of unconscious thought — equivalent to “sleeping on it” — to make better decisions. This period gives your brain an opportunity to simplify the decision so that your choice checks your big three boxes.

For certain kinds of decisions — those that are complex and where you have some expertise — “sleeping on it” may be more helpful than spending minutes or hours of conscious thought on it. The brain makes good unconscious decisions, when we let it.

We’ve got billions of neural cells enabling us to make decisions. They process information and help us focus on it and remember it down the road. Sleep deprivation slows that work down, compromising our mental performance.

The moral of the story: if you want to make the right decision, stop thinking about it, get some sleep, and let your brain do the rest.

Why Dating After 24 Produces the Best Relationships

Why Sleeping On It Helps Make the Best Decisions

Walk Away Alive; Your Life is More Valuable