Jack Churchill was a World War 2 British commando who served with distinction in a number of theaters. His exploits earned him the Military Cross.

He was known as ‘Mad Jack’ by his men and his fellow officers for his ferociousness in combat. Unlike his more conventional peers, his weapons of choice were not the traditional British fire arms of the period. Instead, he chose to rush into combat with a long bow, a sword and his trusty bag pipes. 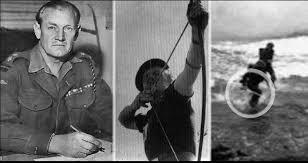 In 1943, Mad Jack and a corporal infiltrated a German held town in Sicily, capturing 42 men and a mortar position… with only his bagpipes, sword and bow.

When the war ended in 1945 after the dropping of the bombs on Nagasaki and Hiroshima, he was extremely disappointed and was quoted as saying “If it wasn’t for those damn Yanks, we could have kept the war going another 10 years.” They don’t make em like they used to 🙂