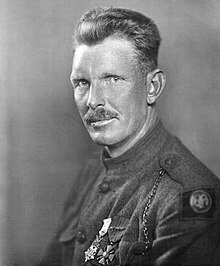 Alvin Cullum York (December 13, 1887 – September 2, 1964), also known as Sergeant York, was one of the most decorated United States Army soldiers of World War I. He received the Medal of Honor for leading an attack on a German machine gun nest, taking at least one machine gun, killing at least 25 enemy soldiers and capturing 132. York’s Medal of Honor action occurred during the United States-led portion of the Meuse-Argonne Offensive in France, which was intended to breach the Hindenburg line and force the Germans to surrender. He earned decorations from several allied countries during WWI, including France, Italy and Montenegro.

During an October 8, 1918, attack that occurred during the Meuse-Argonne Offensive, York’s battalion aimed to capture German positions near Hill 223 along the Decauville railroad north of Chatel-Chéhéry, France. His actions that day earned him the Medal of Honor. He later recalled:

The Germans got us, and they got us right smart. They just stopped us dead in our tracks. Their machine guns were up there on the heights overlooking us and well hidden, and we couldn’t tell for certain where the terrible heavy fire was coming from … And I’m telling you they were shooting straight. Our boys just went down like the long grass before the mowing machine at home. Our attack just faded out … And there we were, lying down, about halfway across [the valley] and those German machine guns and big shells getting us hard.

Under the command of Sergeant Bernard Early, four non-commissioned officers, including recently promoted Corporal York, and thirteen privates were ordered to infiltrate the German lines to take out the machine guns. The group worked their way behind the Germans and overran the headquarters of a German unit, capturing a large group of German soldiers who were preparing a counter-attack against the U.S. troops. Early’s men were contending with the prisoners when German machine gun fire suddenly peppered the area, killing six Americans and wounding three others. The loss of the nine killed and wounded put York in charge of the seven remaining U.S. soldiers. As his men remained under cover, guarding the prisoners, York worked his way into position to silence the German machine guns. York recalled:

And those machine guns were spitting fire and cutting down the undergrowth all around me something awful. And the Germans were yelling orders. You never heard such a racket in all of your life. I didn’t have time to dodge behind a tree or dive into the brush… As soon as the machine guns opened fire on me, I began to exchange shots with them. There were over thirty of them in continuous action, and all I could do was touch the Germans off just as fast as I could. I was sharp shooting… All the time I kept yelling at them to come down. I didn’t want to kill any more than I had to. But it was they or I. And I was giving them the best I had.

During the assault, six German soldiers in a trench near York charged him with fixed bayonets. York had fired all the rounds in his M1917 Enfield rifle, so he drew his M1911 semi-automatic pistol and shot all six soldiers before they could reach him.

Imperial German Army First Lieutenant Paul Jürgen Vollmer, commanding the 120th Reserve Infantry Regiment’s 1st Battalion, emptied his pistol trying to kill York while he was contending with the machine guns. Failing to injure York, and seeing his mounting losses, he offered in English to surrender the unit to York, who accepted.

By the end of the engagement, York and his seven men marched their German prisoners back to the American lines. Upon returning to his unit, York reported to his brigade commander, Brigadier General Julian Robert Lindsey, who remarked: “Well York, I hear you have captured the whole German army.” York replied: “No sir. I got only 132.”

York’s actions silenced the German machine guns and were responsible for enabling the 328th Infantry to renew its attack to capture the Decauville Railroad.

After his platoon suffered heavy casualties and 3 other noncommissioned officers had become casualties, Cpl. York assumed command. Fearlessly leading seven men, he charged with great daring a machine gun nest which was pouring deadly and incessant fire upon his platoon. In this heroic feat the machine gun nest was taken, together with 4 officers and 128 men and several guns.

In attempting to explain his actions during the 1919 investigation that resulted in the Medal of Honor, York told General Lindsey “A higher power than man guided and watched over me and told me what to do.” Lindsey replied “York, you are right.”