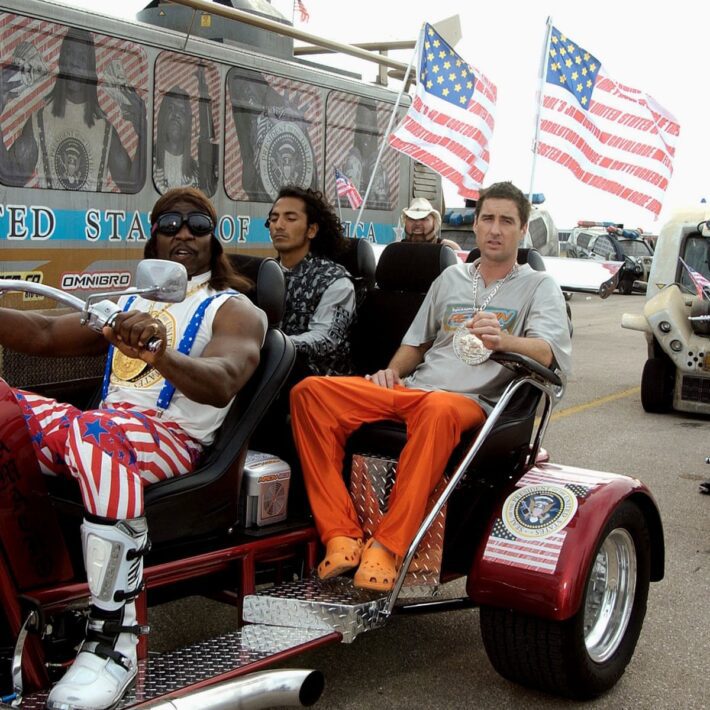 We are living in strange times. Someone born in the 1800’s might mistake us for an alien species, or maybe just plain insane. However, we can’t say we didn’t see it coming. Hollywood has been producing films depicting various interpretations of “the future” for nearly a century. Funny enough, a broken clock is correct twice a day, as was Hollywood. There are five movies that predicted the woke tech surveillance state we live in, and you should give them a watch.

In this 1994 comedy, a fertility research project sees a male scientist (Arnold Schwarzenegger) agreeing to carry a pregnancy in his own body. Yes, a pregnant man gives birth to a baby. If that wasn’t enough, we get some Danny DeVito for good measure. Should Director Ivan Reitman get credit for the “pregnant man” emoji? Where are Arnold’s royalties? Today, there are many groups promoting the idea that biological women who identify as men can in fact get pregnant. Here is an excerpt from a very woke Healthline article:

Yes, it’s possible for men to become pregnant and give birth to children of their own. In fact, it’s probably a lot more common than you might think. In order to explain, we’ll need to break down some common misconceptions about how we understand the term “man.” Not all people who were assigned male at birth (AMAB) identify as men. Conversely, some people who were assigned female at birth (AFAB) identify as men. These folks may be “transgender” men or transmasculine people.

Back in 1992, Rodney Dangerfield’s character, Chester Lee, tries to climb the corporate ladder by agreeing to coach the company’s girls soccer team. He enlists the help of a secret weapon, his fiancée’s son (played by Jonathan Brandis) whom he disguises as a girl. Yes, a boy was playing soccer against girls, and dominating. This year we saw transgender swimmer Lia Thomas, a biological male, compete in women’s collegiate Division 1 swimming. Lia dominated, thus causing FINA to change their rules and ban biological males from competing in the women’s division. We knew this was a bad idea thirty years ago, right Rodney? He’s probably turning over in his grave right now.

This 1993 action flick had Sly Stallone’s character, John Spartan, brought out of a cryo-prison to help capture his old violent nemesis who is loose in a pacifist future society. When Spartan gets there, he notices society has become soft and out of touch with human nature. Censorship is prevalent and anything potentially offensive and needs to be softened. Here are some examples from the movie, and their real life counterparts:

The year 2027 is depicted in this 2006 thriller, and it’s a pretty bleak future in which all women have mysteriously become infertile. Clive Owen’s character, a former activist, agrees to assist in transporting a miraculously pregnant woman to a sanctuary in the ocean. In the real world, as of 2020, the U.S. birth rate was 55.8 births per 1,000 women between the ages of 15 and 44, a decline of almost 20 percent from the rate of 69.3 in 2007. Could we be on the same path? Testosterone levels are declining, too, so do your part to keep that sperm as healthy and voluminous as possible.

One of Tom Cruise’s best roles sees him as Chief John Anderton, member of a special police unit in the year 2054. Using the massive amounts of data being collected, the surveillance state can arrest people before they commit crimes. When Anderton is accused of a future murder, all hell breaks loose. Today, nearly all actions we take are monitored, and data surrounding such events analyzed. Data about our faces, fingerprints, voices, and behaviors are stored in the cloud. Companies like Meta (Facebook), Alphabet (Google) and Amazon use it to predict our future behavior and sell us more products. As artificial intelligence (AI) evolves, is it too far fetched to believe law enforcement will use the technology in the same manner as Minority Report? Predictive Policing is real, and could be the future.

Mike Judge’s classic 2006 comedy examines a future where intelligent people stop procreating so they can focus on their careers, but dumb ones don’t. The opening scene says it all:

If you believe Hollywood is predicting our future, then you realize at a certain point, we will see computers become self aware and overtake humans. Apparently this may have already begun at Google. I just hope I’m not here to have my skull plugged into the metaverse permanently.