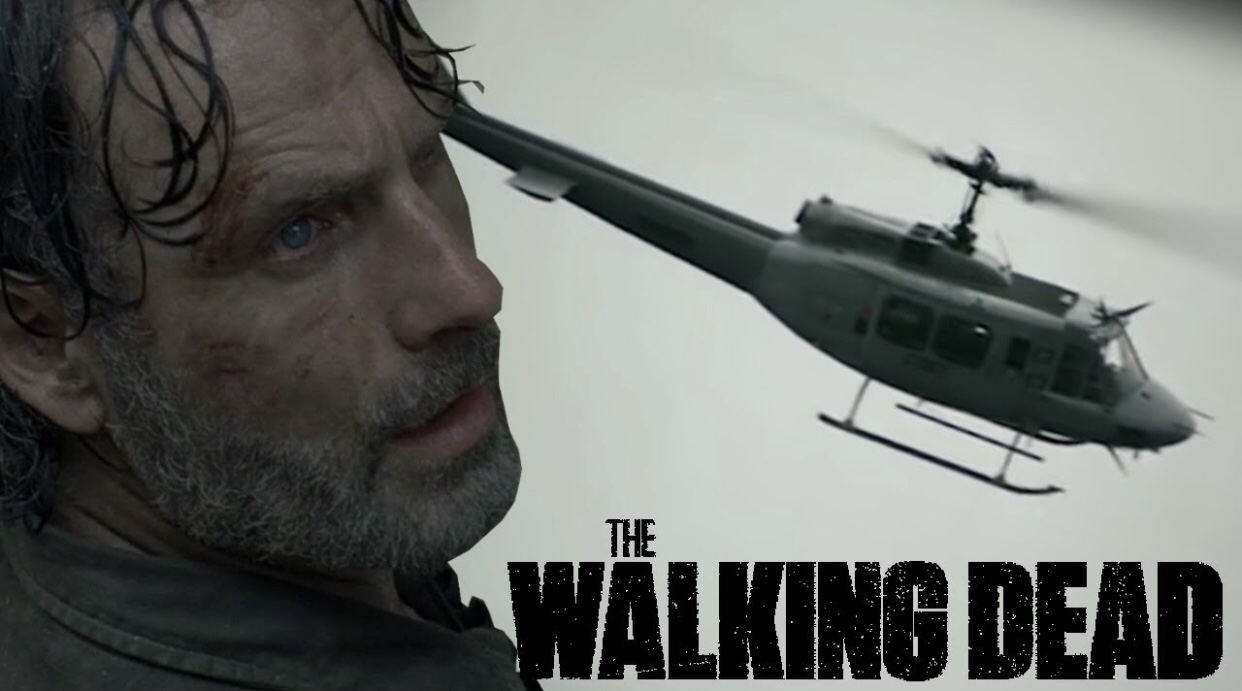 Fans of the Walking Dead have waited five months to find out the fate of their favorite hero, Rick Grimes. After eight seasons as the show’s leading man, it leaked in May that Andrew Lincoln would be leaving the show during season nine. Some believe it’s a publicity stunt to gain higher ratings, while others truly believe Lincoln is leaving to spend more time with his family back in London.

The usually reliable spoiler pages have posted some conflicting information as well. At first, it was confirmed Rick would die, but new information surfaced stating his fate may be ambiguous. According to the rumors, Lincoln’s last episode as Rick Grimes will air in under three weeks on Sunday, November 4th. So, what will really happen to everyone’s favorite sheriff’s deputy?

First, let’s break down the facts. Lincoln did stop filming after episode five. and was seen heading back to the UK. So, it’s logical to believe that there will be a big exit or reveal during this episode. 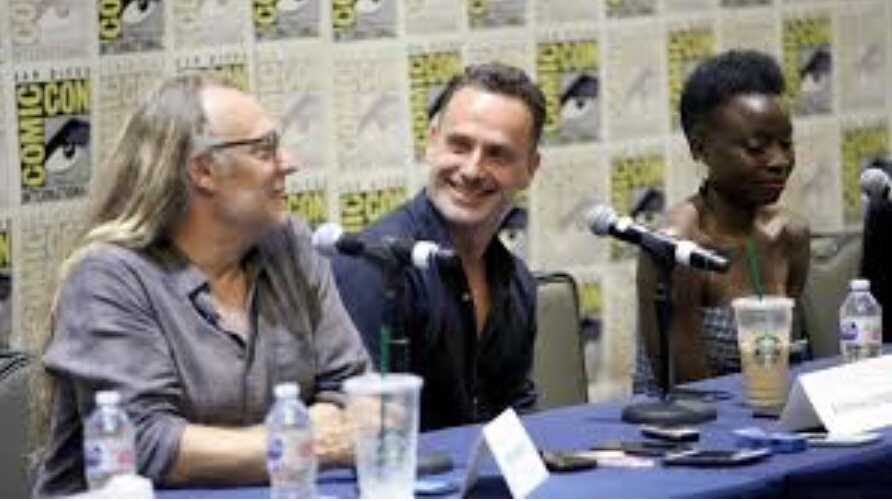 Next, Lincoln has confirmed at Comic Con that this is his last season playing Rick Grimes ON the show.

“This will be my last season playing the part of Rick Grimes,” Lincoln said. “I love this show. It means everything to me. I love the people who make this show.” He did, however, confirm that his relationship with the Rick Grimes character is “far from over”… 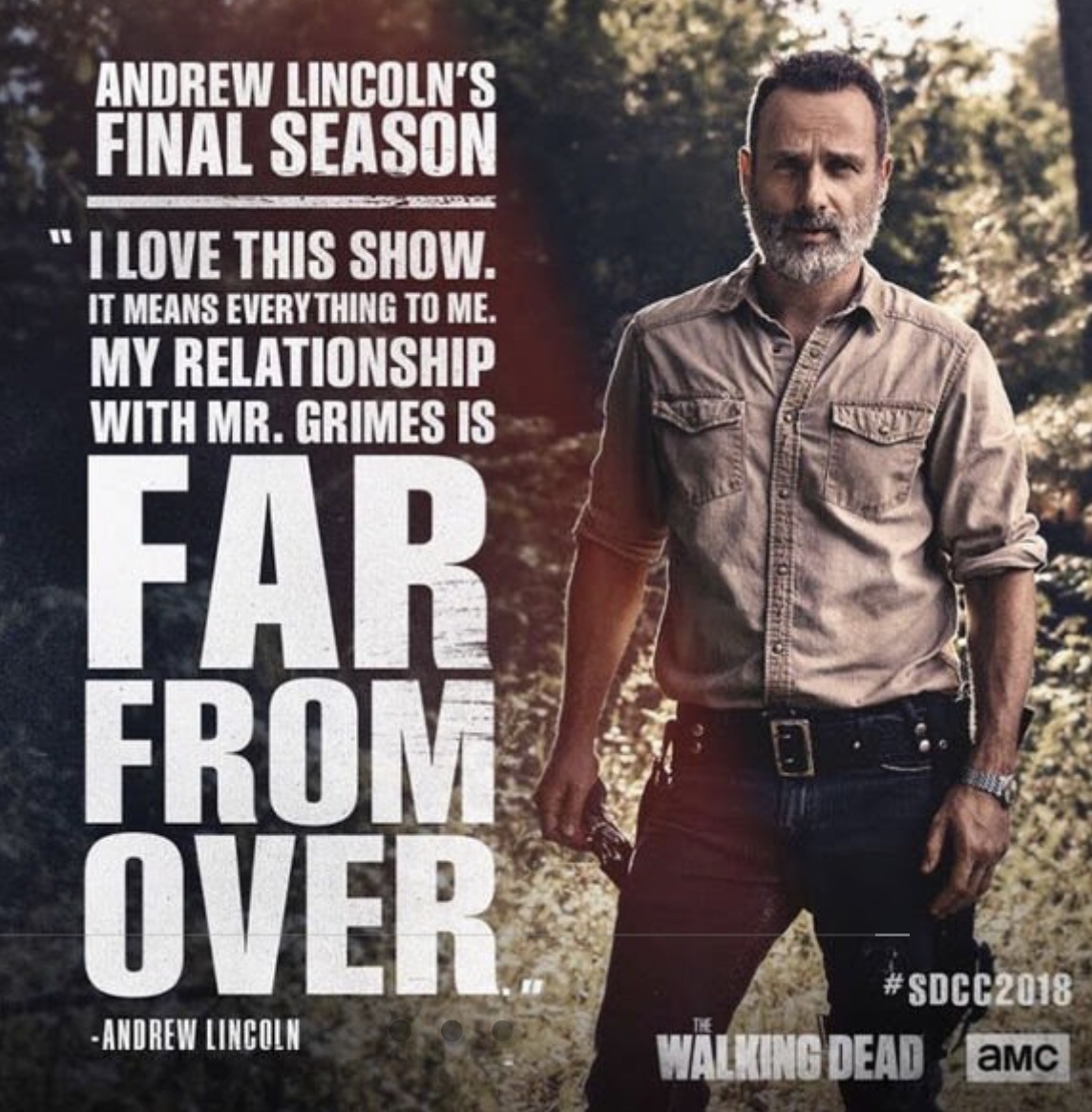 Past and current co-stars have publicly said their goodbyes to Lincoln, praising his professionalism and dedication to the role. This would make sense for a co-worker leaving a job, and no longer being on set day to day.

Although he left Georgia after episode five, Lincoln has recently been back on set to “shadow directors” because he apparently wants to try his hand at directing. Note, season nine’s final episodes are still being filmed, and Andrew Lincoln is on the premises. Hmmm…

Nobody associated with the Walking Dead has confirmed Rick’s death. In fact, they have made some very confusing statements about his fate, and ever-reliable spoiler site “The spoiling Dead fans” refuses to confirm his death. Recently, Khary Payton (who plays King Ezekiel) made some cryptic comments about Rick’s fate, stating:

“It was an amazing and surreal moment to be there and to be a part of seeing not just Rick kind of walk away – I’m not sure how you want to say that he leaves the show – but the way Andy left as well.” He continued: “When I look back and think about it I think it was an amazing event, and I just got this feeling that nothing’s set in stone, I’ll just leave it at that.” 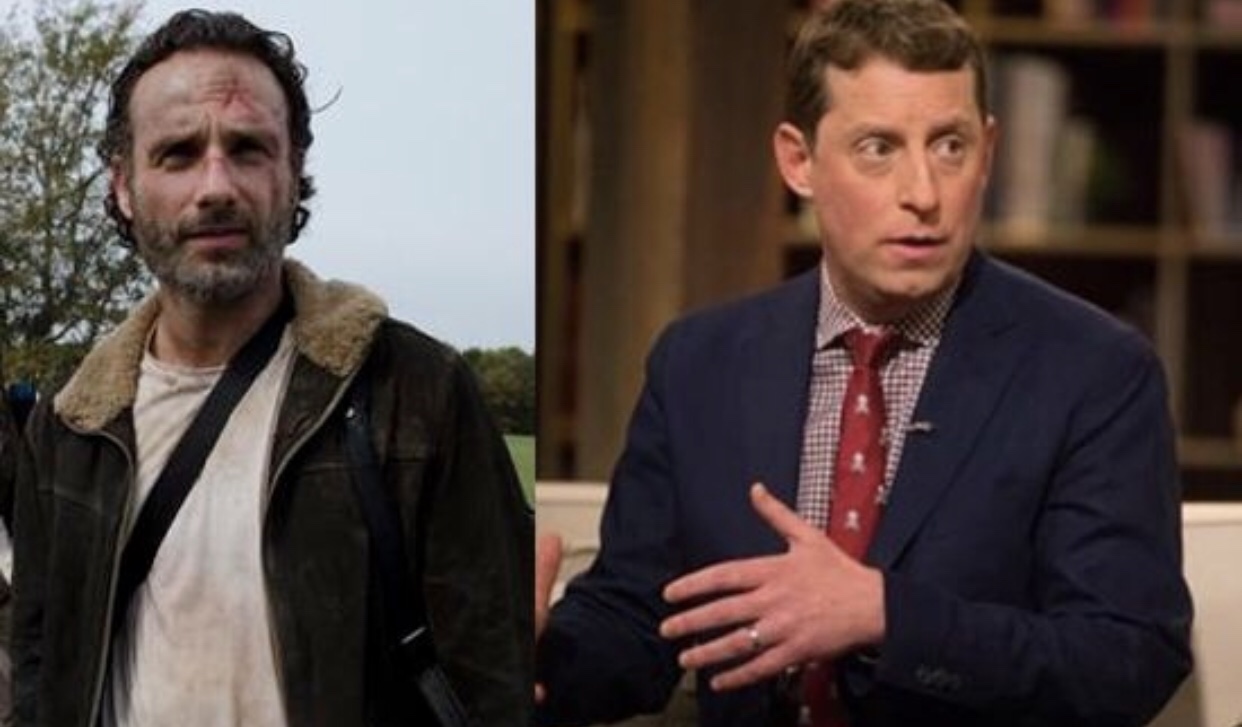 Chief Content Officer Scott Gimple has announced an intention to have another ten seasons of the show, plus additional spin-off shows, video games and movies. Could it be that Rick Grimes will somehow survive episode five, only to have his story completed with a movie? Gimple, appearing on live aftershow Talking Dead following the Fear The Walking Dead season four finale, teased a buzzworthy future development:

When Gimple mentions “people who haven’t watched the show” he is possibly referring to the mainstream movie audience that would likely head to theaters to watch a zombie movie with Rick Grimes in the leading role. “We have a bunch of different things in mind,” Gimple teased of the “cool new Walking Dead stuff” on the way. “Some things that are really complimentary to the stuff we’re doing now and some stuff that’s far afield and very different.” 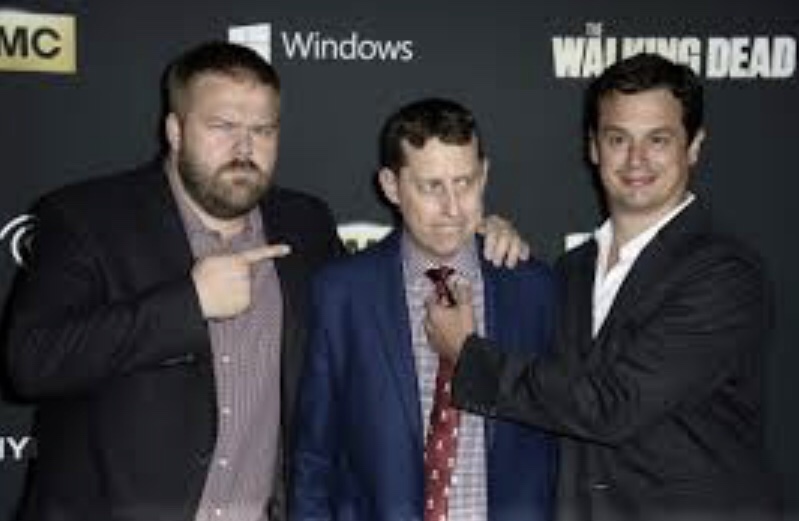 AMC Networks CEO Josh Sapan has since declared the network’s intentions to expand the universe “over the next decade, plus,” a future that will take the form of multiple television shows and movies on either the small screen or the big screen. Last month, Bloomberg reported that AMC has had discussions with “several large media companies” about partnering on the projects, which would accumulate a collective cost to the tune of “several hundred million dollars.” It would make the most business sense to use the series’ most iconic character to propel future theatrical initiatives. Filming a two hour movie is also a lot less work than sixteen episodes in the brutal Georgia heat, and would provide Lincoln more of the personal time he desires.

Every poll (and every comments section) reveals that a tremendous number of fans (nearly half) have promised to stop watching if Rick Grimes is killed. AMC has to be aware of the backlash they will suffer if Rick is definitively killed on-screen. Their record-breaking ratings are already in decline, and the season nine premiere was the show’s lowest-rated since season one. If half of the fans really did stop watching, AMC’s massive investment would be a complete failure. Let’s face it; that is just bad for business. They won’t let it happen. 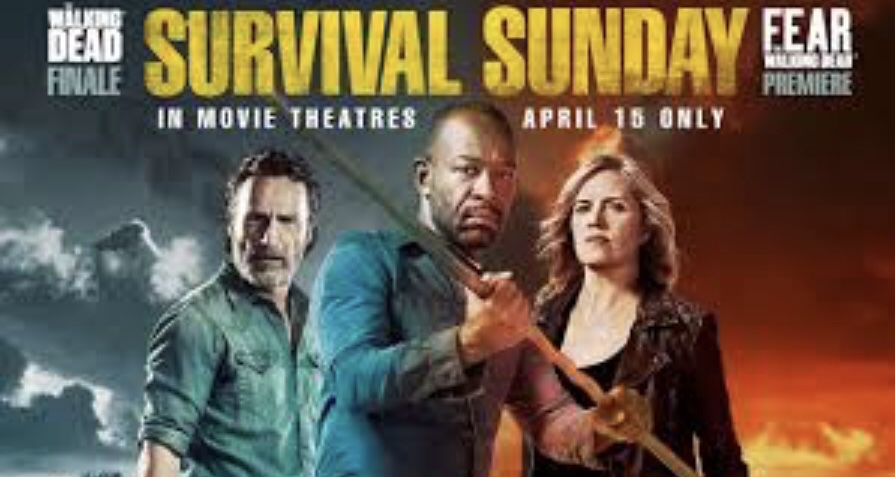 Last year, the Walking Dead season finale and the Fear the Walking Dead season’s premiere (dubbed Survival Sunday) aired back to back in select movie theaters across America. Clearly AMC was testing what turnout would look like for movie attendance. The fan response was strong, and would potentially be even stronger if a Rick Grimes – centric movie allowed fans to see the continuation of his story. It would also be a massive cash cow. Since Scott Gimple has promised a “big announcement” coming soon, what better time to announce a Walking Dead movie starring Rick Grimes after episode five of this season when Rick makes his exit?

Many fans of the Sopranos wished for a Tony Soprano movie to compete the character’s open-ended arc, but it never transpired and sadly, actor James Gandolfini passed away. The demand will be there, and AMC would be foolish to pass up the opportunity. Why launch a movie universe without your biggest character? That’d be like DC launching a movie universe without Batman…

Andrew Lincoln himself hinted at Rick’s survival when he was asked if Rick had to die: “Hey, Lennie James is a perfect example of leaving without dying and doing rather well on it. I just talked to him about five minutes ago and he looks incredibly healthy; he looks terrific. So yes, there is that way. And there is obviously the other way, which we’ve done quite a lot. And obviously, I’m not going to tell you which way. I mean, I’d prefer the Lennie James of it all. But I think what we have in store this season is truly remarkable, and I’m very, very proud of the work we’ve done.”

Hardcore fans of the show must be wondering how Rick would realistically leave his beloved group, including girlfriend Michonne and daughter Judith, without being killed. Consider the only plausible scenarios: 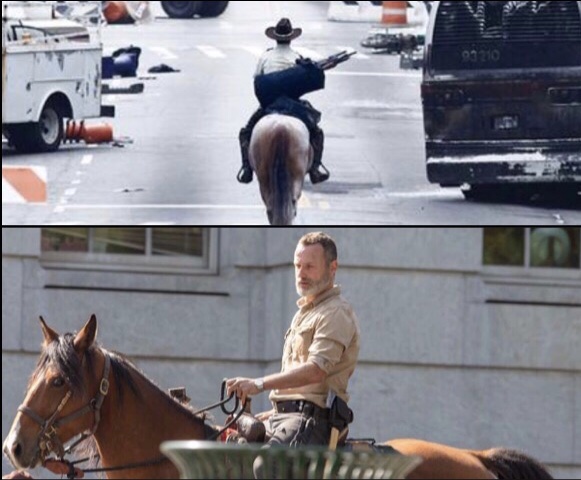 1. Horseback ride from hell: Rick sacrifices himself for the group and volunteers to lead away a large zombie horde while on horseback (nice nod to Season 1 Rick), but in the process he strays too far and is blocked/unable to get back. This could be due to zombies, a natural disaster, or new villains. He could be kidnapped, in hiding, or facing a serious injury, preventing him from returning. Cue the opening scene of the Rick Grimes movie. Likelihood: Strong. This would have season nine come full circle back to season one, as Rick ventures off on horseback alone, to deal with the new world. We’ve seen bad weather and villains impact character journeys recently, with the hurricane playing a major role in the plots for Fear the Walking Dead and TWD this recent season. 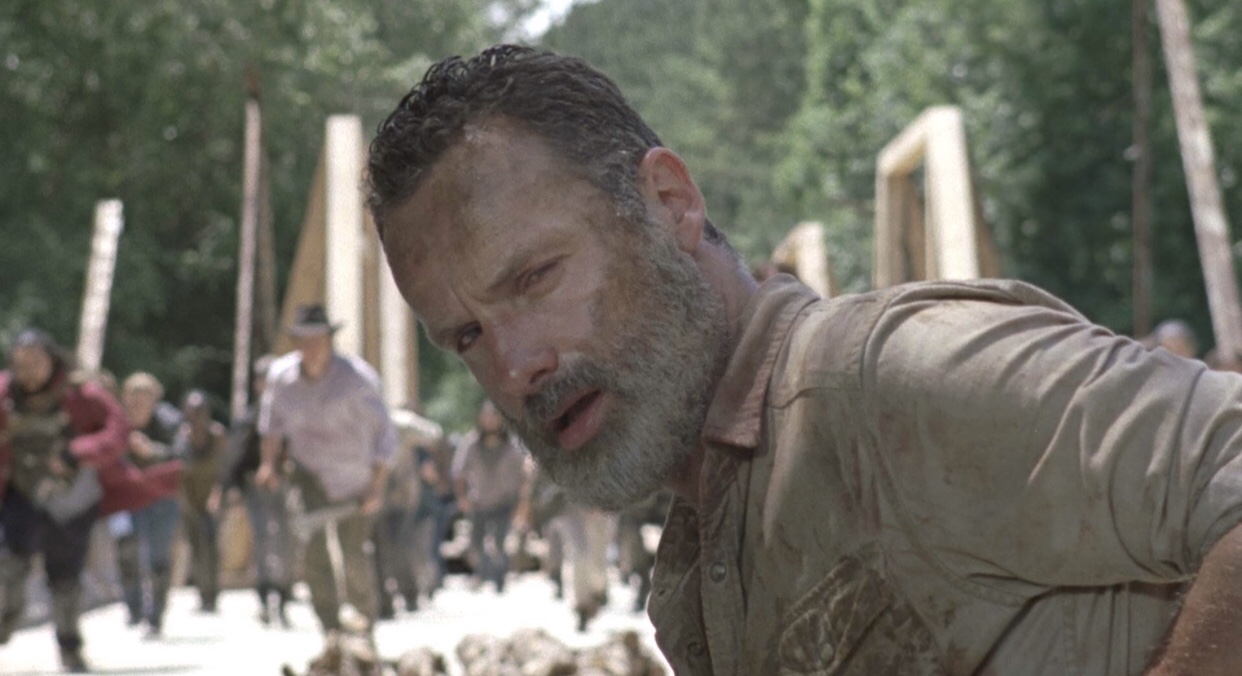 2. Helicopter rescue: Rick is severely wounded (as alluded to in the season nine trailer), and his only chance of survival is to be airlifted by helicopter to a new settlement. Rick has been seeing helicopters since season one, and we know Jadis/Anne is in communication with the people operating the helicopter that visited the garbage dump.

We also know that Georgie and the Commonwealth, a very large and sophisticated settlement, exist out there somewhere. Maybe Rick will end up being scooped up by that group. 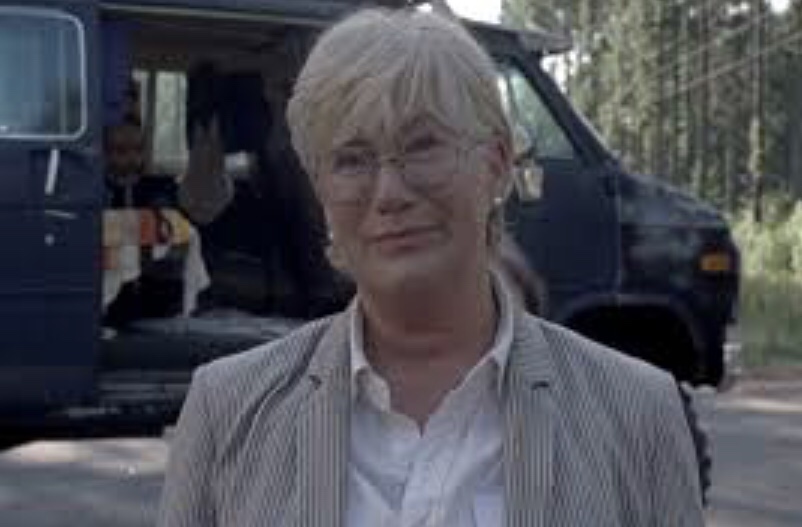 It’s possible Rick will be forced to make a split second decision and choose to leave the group behind in order to save his own life, knowing Michonne and Judith remain in good hands.

Rick has been seeing helicopters for nine seasons, and what better way to come full circle than to have “Helicopter Boy” get into one? Likelihood: Very Strong. This helicopter has been hanging around for a long time, and clearly it has a motive and a home base. It also opens up lots of new opportunities for the story to go in vastly different directions. For Rick to willfully leave the group and end up far away enough to not return, a helicopter would be necessary. 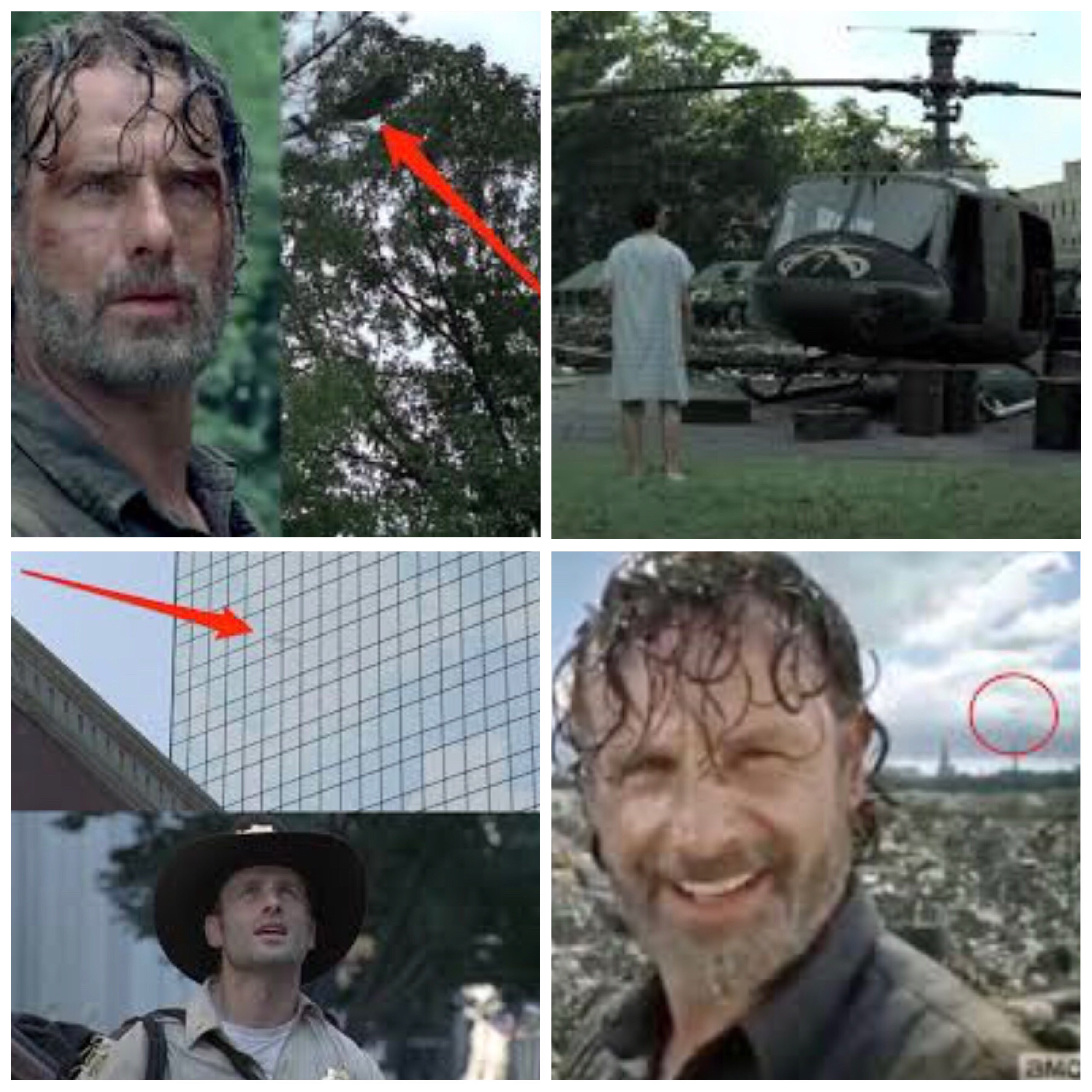 3.Rick gets injured during a retreat of sorts and suffers amnesia: This is possible, but not probable. The Governor ended up changing his own name to fit into a new group and a new life. A head injury could do the same to Rick. Likelihood: low. This would be a cheesy TV trick, and fans would be upset, especially after the Glenn/dumpster trick. 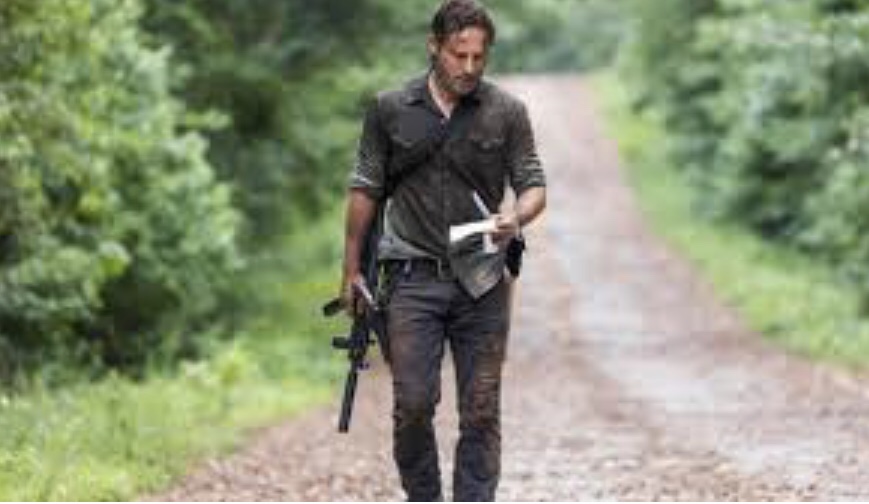 4.Rick is exiled / self exiles: It’s entirely possible that Rick will break the rules Maggie, Jesus and Michonne have been discussing throughout the first two episodes of this season. Since Rick strives to keeps Carl’s dream of a peaceful community alive, he may have to willfully leave the group if he ends up breaking their rules. Sure, it would be hard on Michonne, but maybe Rick breaks Michonne’s trust with his actions. Surely Rick wouldn’t take a child (Judith) on the road with him were he to be exiled, so she would stay behind. Likelihood: moderate. The themes are there so far in season 9, and it would lead Rick on a completely new adventure. We just don’t think Michonne would let this happen. 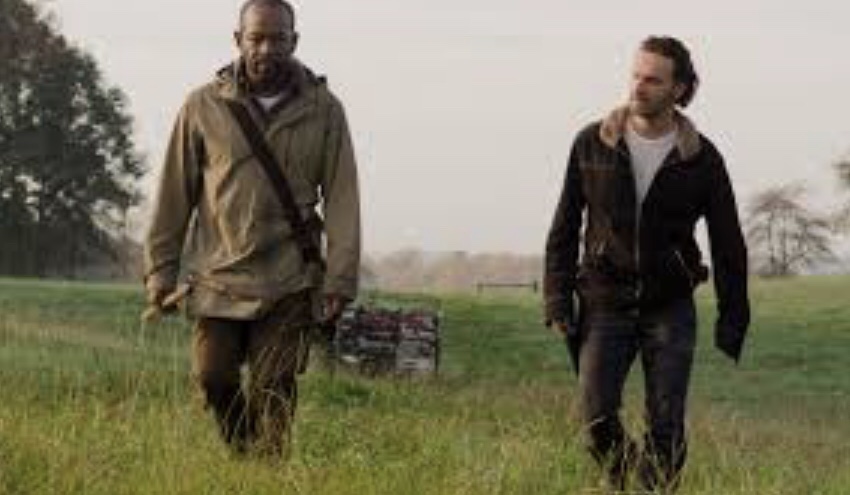 5. Or 4a. Morgan reunion: Maybe during this exit, he finds Morgan, or goes on a mission to find Morgan. In time, he could join Fear the Walking Dead, leaving the possibility of a large reunion at the end of the show’s run. Technically, Lincoln would have never lied when he said he was done playing Rick Grimes on the Walking Dead, since Fear is a separate show. Likelihood: low. I don’t see Andrew Lincoln committing to a full 16-episode TV series for awhile, unless it’s production is based in the UK. 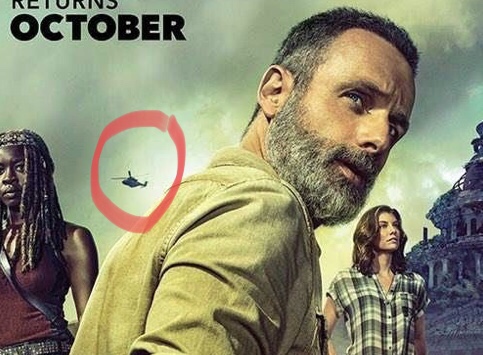 Somehow, some way, the helicopter is going to come into play. It’s even featured in the season poster, strategically positioned over Rick’s shoulder. The big money is on Rick surviving, and ending up in that helicopter. Bank on it.

Is 2021 the Year of the Zombie Apocalypse?

Anyone criticizing Rudolph is a moron