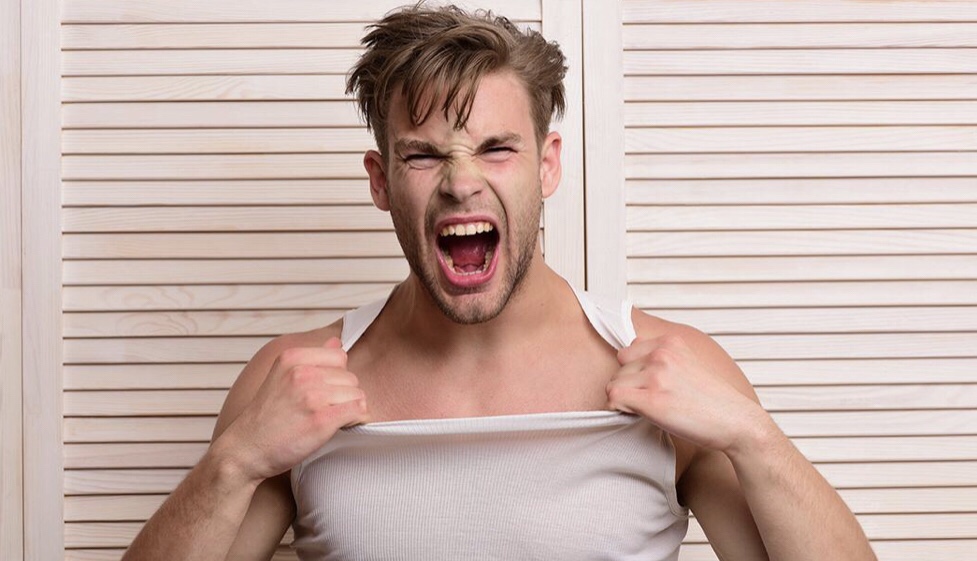 A University of Texas-Austin student was forced to reflect on a film about toxic masculinity after a Title IX investigation found him guilty of harassment based on a non-criminal standard of evidence.

The student was assigned to watch “The Mask You Live In” and write a “reflection paper” explaining how the film influenced his understanding of masculinity and what steps he will take to encourage “healthy” masculinity in society. 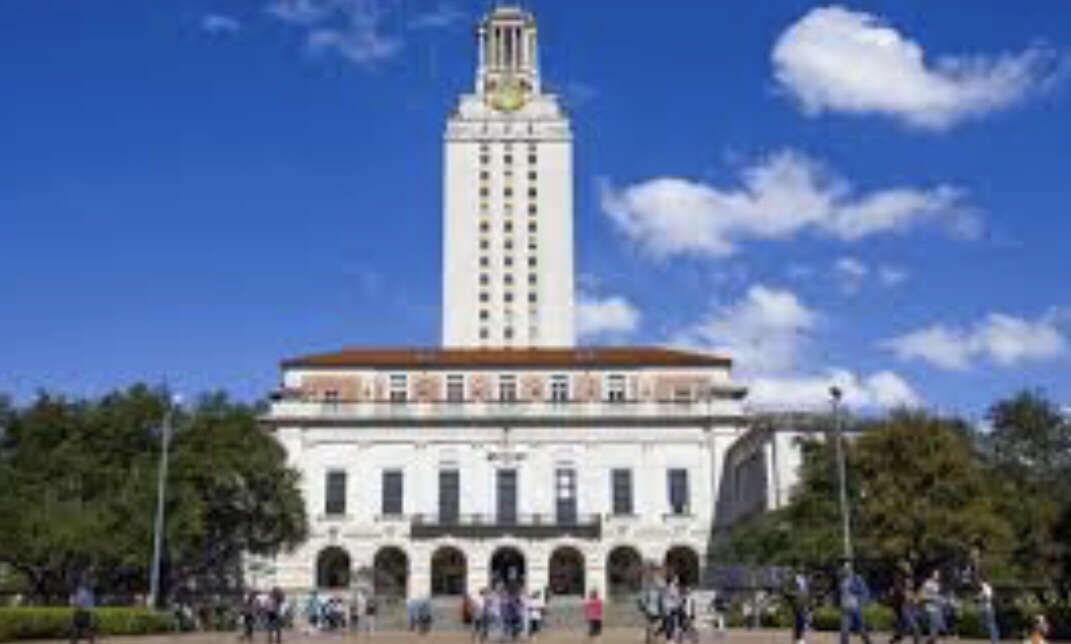 A University of Texas-Austin student was forced to reflect on a film about toxic masculinity after a Title IX investigation found him guilty of harassment based on a non-criminal standard of evidence.

According to an internal letter obtained by Campus Reform, following an appeal of his sanctions, the student received a note from UT president Gregory Fenves stating that “nothing you allege, even if true, would change the ultimate outcome of this matter.”

The student—who requested anonymity—graduated in Spring with a JD. During his time in law school, a female student filed six Title IX complaints against him over two years: three for harassment, two for stalking, and one for violation of a no-contact order.

Upon investigation, the student was found guilty of of violating the school’s harassment policy. The student, however, claims that the determination was made “on very questionable grounds” using the Obama-era “preponderance of the evidence standard,” rather than the “beyond a reasonable doubt” threshold used in criminal cases. The student also alleges that the verdict was partially influenced by an “anti-male bias” on campus.

As previously reported by Campus Reform, the student went on to contact the Department of Education’s Office for Civil Rights (OCR) in mid-June, which later agreed to investigate his claim.

In an interview with Campus Reform, the student further alleged that his “sanctions” serve as evidence the school has discriminated against him due to his sex, and explained that he decided to come forward with his story after seeing an article exposing the school’s characterization of masculinity as a “mental health” issue. 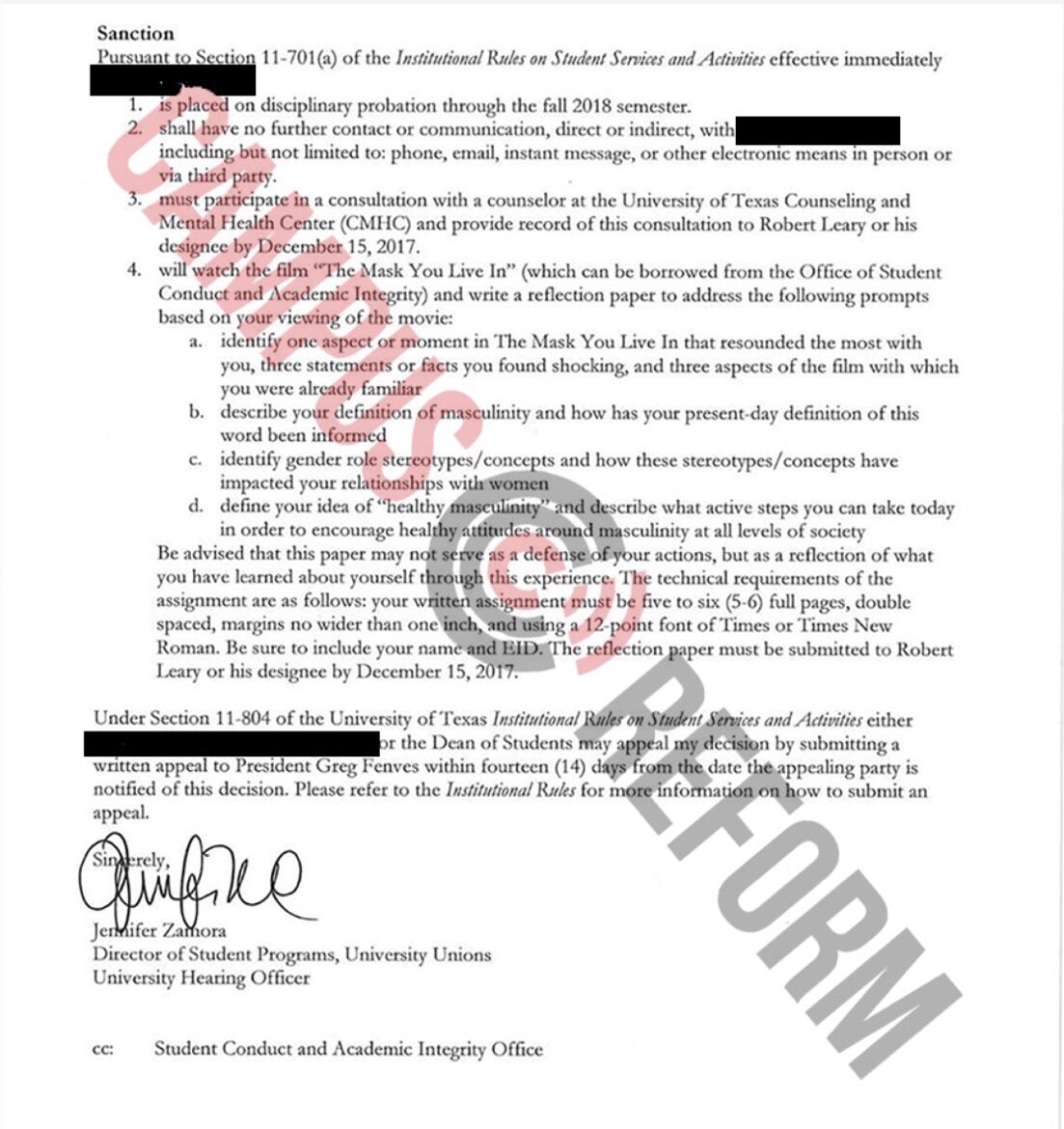 In a letter on October 4, 2017, University Hearing Officer Jennifer Zamora informed the student that “I find that the Office of the Dean of Students HAS PROVEN by the greater weight of the credible evidence that [the student] violated Sections 11-404(a) (4) (Harassment (Sexual) and Stalking) of the Institutional Rules on Student Services and Activities.”

In addition to placing him on disciplinary probation for the fall 2018 semester and forbidding him from having further contact with his accuser, Zamora sentenced the student to “watch the film ‘The Mask You Live In’…and write a reflection paper” on “your definition of masculinity and how it has been informed.”

He was also told to “identify gender role stereotypes/concepts and how [these] have impacted your relationship with women,” and to “define your idea of ‘healthy masculinity’ and describe what active steps you can take today to encourage healthy attitudes around masculinity at all levels of society.”

“Be advised that this [reflection assignment] may not serve as a defense of your actions, but as a reflection of what you have learned about yourself through this experience,” wrote Zamora, adding that the paper should be 5-6 pages, double-spaced.

He was also sentenced to consultations at the University of Texas Counseling and Mental Health Center, the same center that previously ran a program to help men “take control of their gender identity” and fight the shackles of “restrictive masculinity.”

In a interview with Campus Reform, the student said that the sanctions “[make] it clear that my sex was a factor in their disciplinary decision,” pointing out that “My restitution was to go through counseling…and write some humiliating paper about how I would conform to their standards for my sex.”

“That’s not just discrimination; that’s treating masculinity as a mental health issue, and pretending they have some pretentious duty to correct the supposed defects in my sex for the betterment of all society,” he added.

“If the University of Texas-Austin had a program to counsel black students on how to tamp down characteristics associated with black stereotypes, nobody would hesitate to call that racist,” he argued, drawing a parallel with the school’s masculinity programming.

While UT spokeswoman Shilpa Bakre could not comment on the students’ case due to federal privacy laws, she told Campus Reform that such “reflective assignments…may be beneficial for [students’] development as members of the campus community.”

Bakre also said there is no standard procedure for how sanctions are determined when asked whether other students found guilty of violating the same policies have been sentenced to similar “healthy masculinity” reflections.

University of Texas-Austin President Gregory Fenves, however, asserted in a December 2017 letter to the student that the “sanction(s) imposed in this case are consistent with the range of sanctions assessed for similar offenses.”

In that letter—sent to the student after he requested an appeal—Fenves also suggested that regardless of the guilty verdict, the sanctions were meant to be a learning experience.

“A student conduct matter is handled in a way that that compliments the educational mission of the University; it is meant to be an educational process from which you learn,” Fenves explained while denying the student’s appeal.

The student has since graduated from UT-Austin with a JD, and requested anonymity to shield his reputation from further damage.

This story was reported by CampusReform.com

Toni Airaksinen is a New Jersey based Correspondent for Campus Reform, and reports liberal bias and abuse for Campus Reform. Her reporting focuses on campus First Amendment, Title IX, Equal Opportunity, and due process issues, and her stories have been profiled by numerous outlets including Fox News, The New York Post, PBS News, and The Washington Examiner.