Inquiring minds have debated this topic for decades, and for some odd reason, our society can’t finalize a cultural norm that we can universally adopt. Who should pick up the check? Can we please put this topic to bed already? If everyone could follow a few simple guidelines, we would avoid those awkward moments with alligator-armed friends, cheap co-workers, “woe is me” charity cases and gold diggers.

Granted, the topic is not cut and dry, but rather very situational. This requires people to think on their feet and make decisions within seconds, which can be a challenge for some. However, some simple rules can help even the most socially inept doofus. 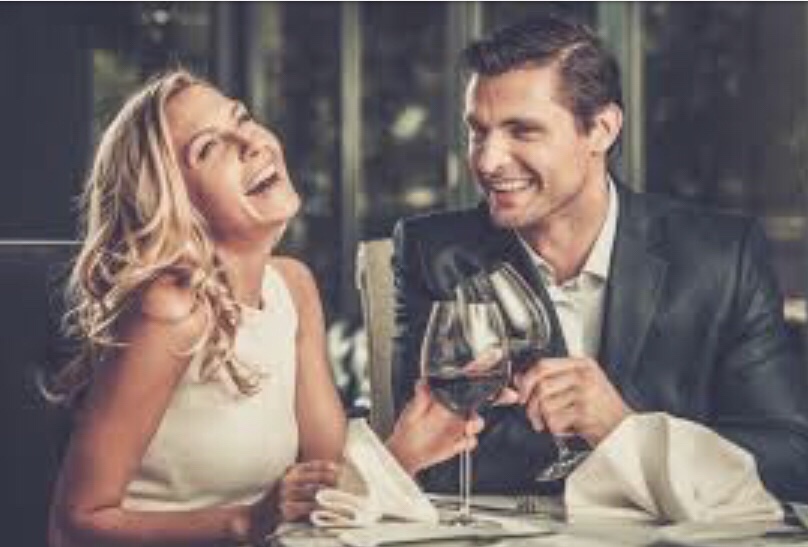 Dating: A date with a woman, and you are not officially a couple.

This is an easy one. When you are courting her, the guy should pay almost every single time. This is tradition in most cultures, especially in America. Many still argue this point and emphasize feminism and female empowerment as counterpoints. On the surface, they seem like valid points because we are all equals and everyone should have similar strengths, but when you unwrap it all, they are totally invalid. The top three reasons why men are responsible for picking up the tab can be found here if you need any convincing.

Show her you are capable and financially stable, and grab the bill. Demonstrate your ambition to always earn more money, and don’t worry too much about price. If you don’t do it, some other alpha male will, and the moment she sees another man as more capable of providing for her than you are, she will kick your ass to the curb. Bank on it.

Pro tip: even though you should be paying for just about everything during the courting period, she should offer. If you are in a situation where she expects it and doesn’t offer at all, you’re going to be in a bad situation eventually. Let her buy you a beer or a slice of pizza. Every once in awhile, it’s okay if she pays for take out or a movie. She should do something special for your birthday. If she doesn’t, your spidey-sense should be high, because you’ve got either a gold digger or a stuck up girl laying next to you.

**Bonus pro tip: Vacation. If you decide to take a vacation together, which is actually a very good test of how compatible you two actually are, let her pay for part of it. Ideally, she should pay for her flight, and you should pick up the hotel and your own flight. Do not feel obligated to fly her around the world and put her up in the Ritz. A vacation is a big project and she should contribute to it. 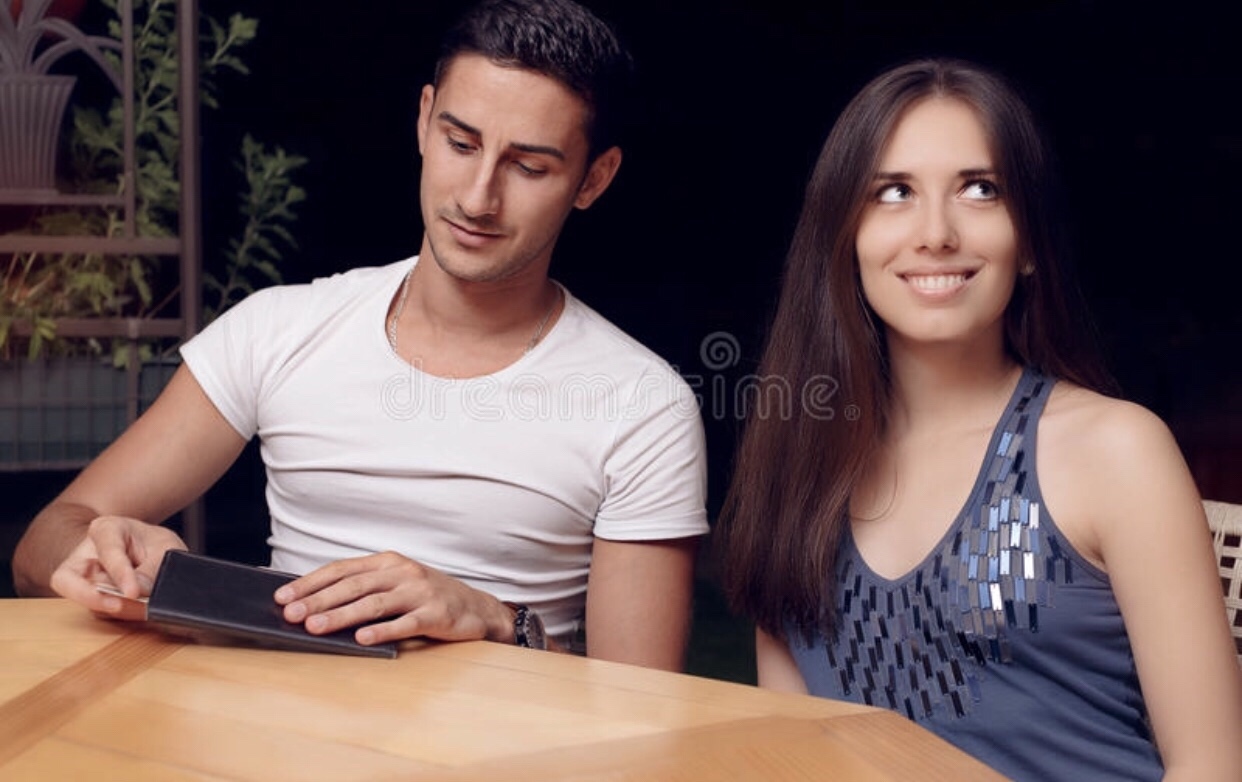 Girlfriend: A date with a woman who you are in an official relationship with. You’ll want to go into this assuming you’re picking up the tab, but generally speaking most couples get into a rhythm and have an understanding of what this expectation is. There are so many factors in play here, including living situation, relationship status, combined income, career, reason for going out. etc. She SHOULD pick up the tab at times, so if she doesn’t, that’s a huge red flag. The last thing you need is a woman that stays in a relationship with you for financial security. In almost all situations, this will ultimately end with the poor sap giving away half of his earnings to an ungrateful woman that is going to end up married to another man. Kanye West accurately described this girl in his song Gold Digger when he said “you go out to eat, he can’t pay, y’all can’t leave, if dishes in the back ya gotta roll up ya sleeves”. Take notice, and cut the rip cord before it is too late.

In healthy relationships she’s picking up the tab 25-50% of the time, but generally speaking this is a conversation you and her should have depending on where you are in the relationship, and what your financial arrangement is. The moment you decide to shack up together and get a place, financial arrangements will have to be made, so having this discussion can generally hold off til then. Just make sure you agree to a system before you sign that joint lease. 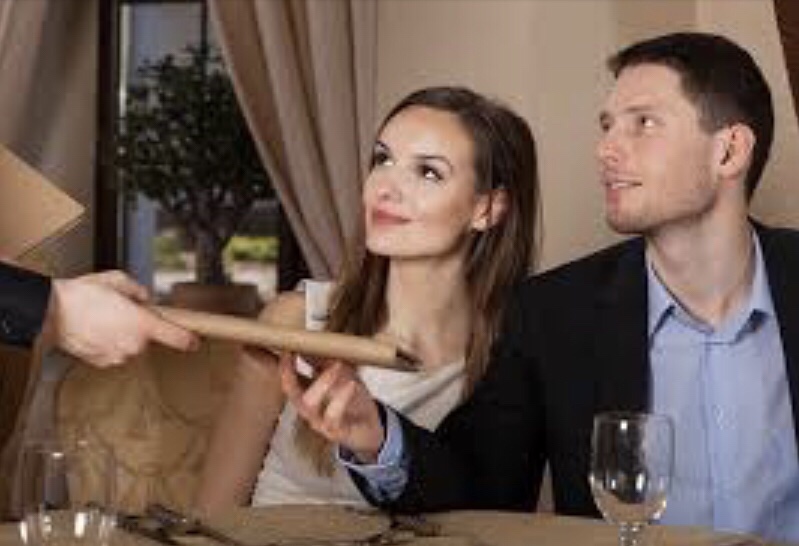 She’s got a ring on it: A date with a woman who is your fiancée or spouse. Happy wife, happy life. On to the next point… 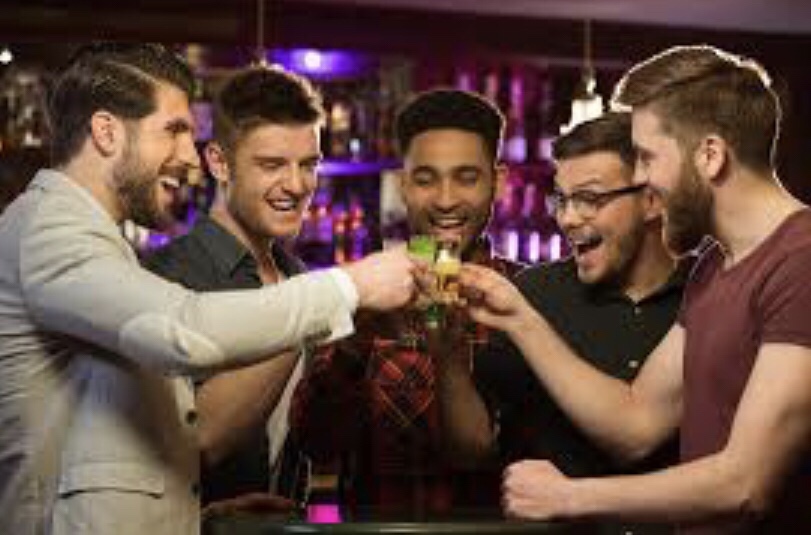 Saturdays are for the boys: A night (or day) out with the boys. At times, this one can get complicated, but one key rule can fix that. Groups of bros generally squat on a territory the entire night/day. It could be at the bar, at their table in the club, or at their cabana by the pool. That is the collective tab that everyone has participated in and contributed to. Sure, some of the boys might wander, drift, or Irish exit, and if they decide to buy drinks at a different part of the venue, that’s their decision. However, the collective area tab is everyone’s responsibility. That should be divided up evenly, no matter what. If someone came late, left early, or didn’t drink, it’s irrelevant. This is what separates boys from men. 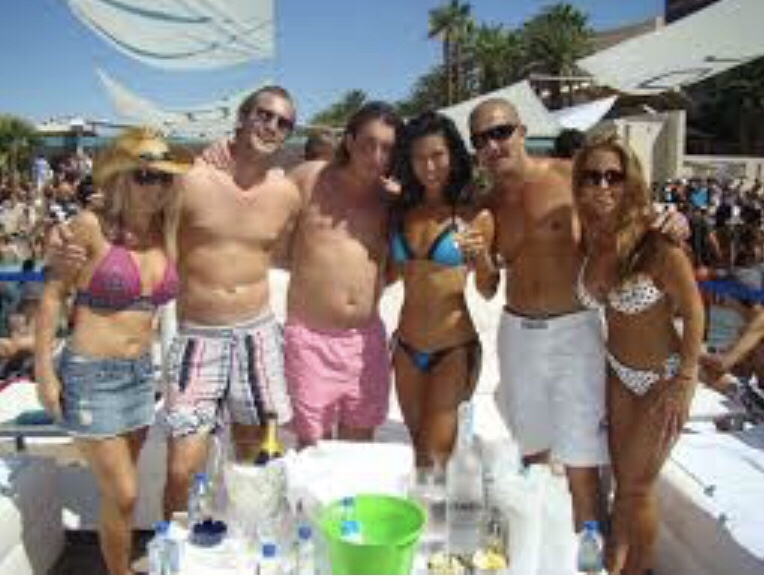 In reality, your tab reflects the real estate you’ve rented at that venue, and if someone is present, they owe for their share of the real estate. If one of the guys happens to meet a lovely lady, or several, those ladies DO NOT COUNT towards the tab. As you plan for your event, you should anticipate this happening, because most guys don’t settle for a total sausage fest the entirety of their night. However, if one of your bros ends up bringing other MEN to your area, those men are required to pitch in for the tab. That should be explicitly stated amongst all parties. If it isn’t, you’ve got a problem on your hands if the new guy drinks a lot, causes issues, or brings other men to the area. Chicks drink free 🙂 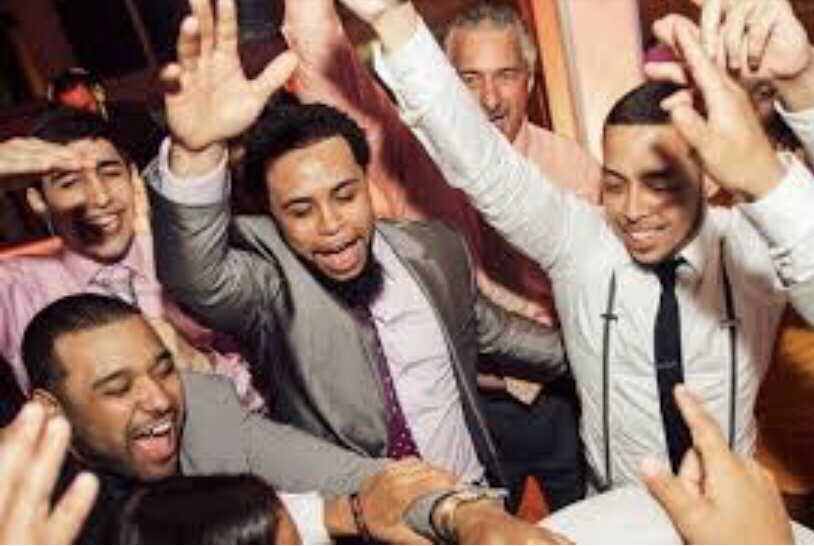 Pro tip: if it’s someone’s birthday, bachelor party, etc. they should never pay. Subtract that body from the headcount total and divide the tab appropriately. 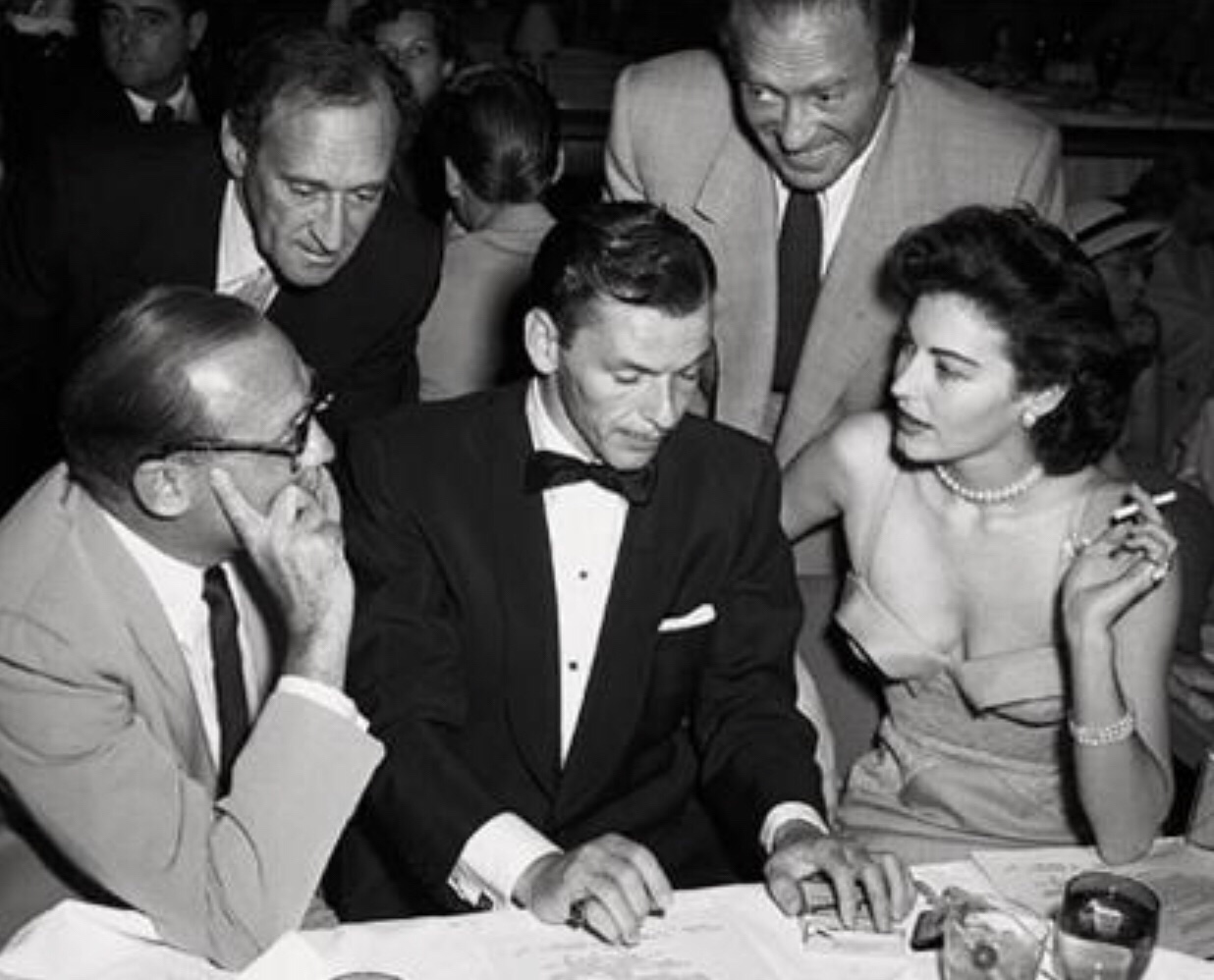 Dinner with a group friends (couples): Friends should be willing to split this, down the middle, by the number of people that attended. If there’s an even number of people and everyone is coupled up, it’s the total tab divided by number of couples. If there’s an odd number because of the single friend(s), the tab should be divided by the total number of people, and couples can double up to pay their share together. Even if you have a friend that is filthy rich from their lucrative career, their lottery win, or bitcoin earnings, you should never expect that person to pay the tab. Friends are equals, and they see each other because they genuinely enjoy each other’s company. No one friend has a responsibility to financially support the others.

A key point here is that the tab should be divided evenly. Take note of that, because there will be friends that eat more, order the steak, drink like it’s a college frat party, or order the Dom P. What you choose to order within the meal is your choice, but remember that it’s a group tab. The worst case scenario is having one friend sit their and tally “what each person owes” at the end of the night. Throw in the tip, tax, bad math, and beer muscles and the next thing you know, you’re losing friends over a $30 difference on a bar tab at TGIFriday’s. People can get very weird about money, so it’s a smart idea to establish the equal split before the outing. 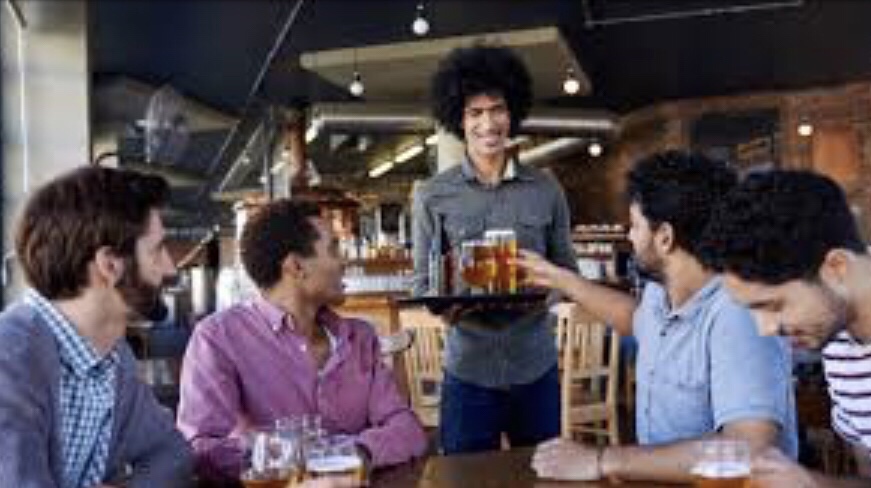 Co-worker events: Another very simple one. The highest-ranking one or two individuals should pick up the tab. Most of the time, they will be able to add this outing to their expense report for team bonding/building, which is totally legit. Unless you happen to work for the legendary Bobby Axelrod and Wags (mandatory “Billions” reference), chances are hanging with co-workers is actually work. You have to continue to remain professional without letting your guard down, thus being unable to truly relax. I’d rather be home on my couch watching TV with my hand down my pants and my pet at my side than have to spend three hours at a mandatory “team outing”. Just remember to thank your boss for the drinks. 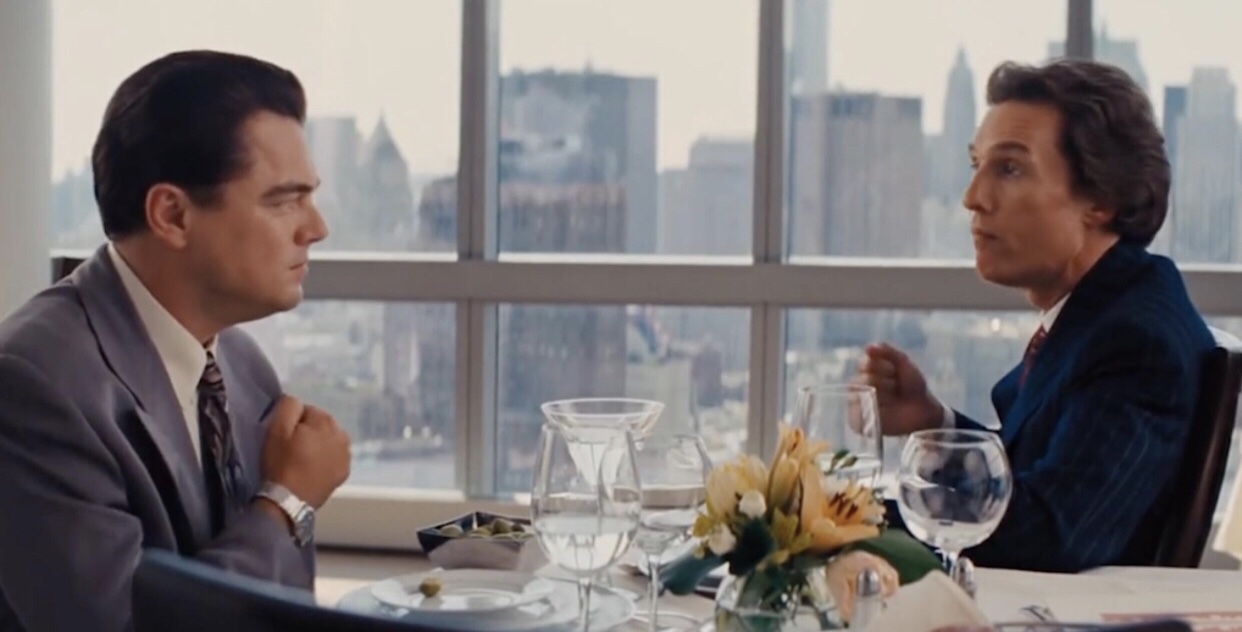 Professional networking (coffee, meal, drinks): Another fairly simple one. Whoever initiated the contact and set up the meet up should pay, regardless of rank. If a young person that wants career advice asks a Vice President to coffee, the young person should pay, even though the VP outranks and outearns them. However, most times the higher ranked person won’t allow it and will pick up the tab anyway. If you’re that young person, take the initiative and offer to pay every time. it shows character and responsibility. 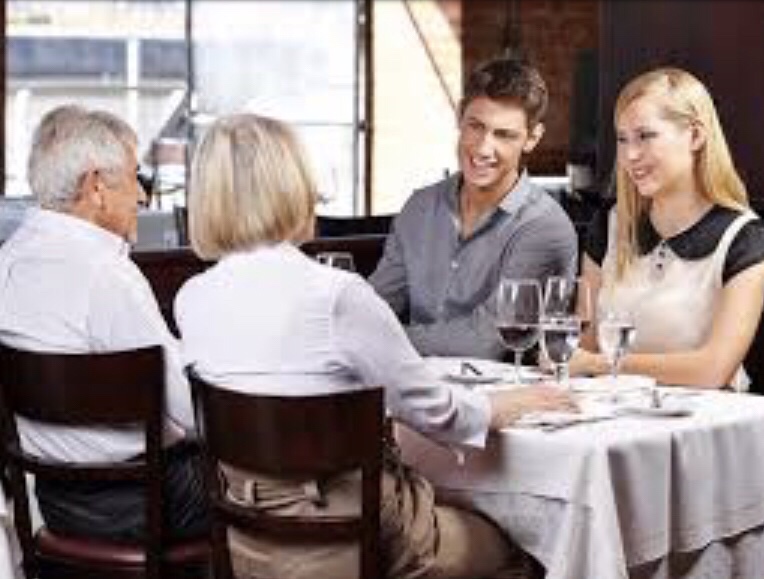 Parents/in-laws: Extremely complex situation here. Much of it has to do with the type of people your parents/in-laws are, along with their level of income. You will want to proceed with caution as to avoid insulting your father / father in law by paying for him, because some men do not accept this and will take offense to it.

Patricia Napier-Fitzpatrick, founder and president of The Etiquette School of New York, weighed in on this topic during an interview with Business Insider and shared the following rule of thumb: “Let’s say you’re taking your in-laws out and you’re an older couple in your 30s and 40s. You and your [partner] are making a lot of money now, but your in-laws are not. In that case you would offer to pay. It’s showing respect for them and how many times they’ve treated. It’s a nice thing to do, a gesture of independence.”

The best advice here is to make sure you aren’t cheap, don’t expect anyone to pay for you, and always try to pay your fair share. At the minimum, offer to chip in for your portion and/or the tip. If they insist on picking up the tab, honor their wishes and be thankful that you are related to such generous people.