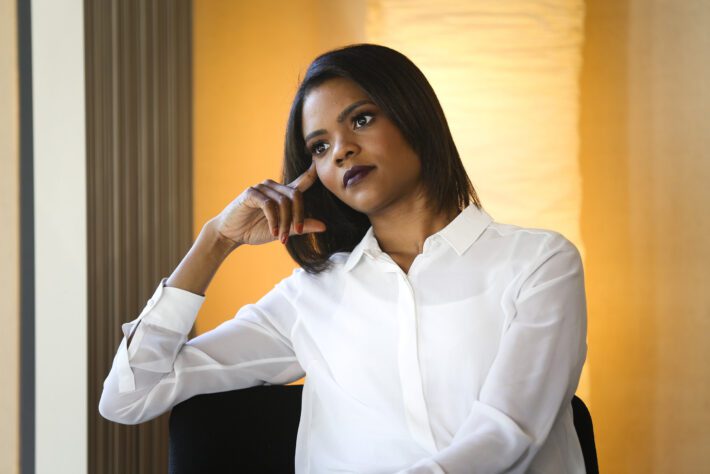 Candace Owens, the conservative political commentator who has made a name for herself by ferociously speaking out against liberal insanity in our society, has once again sent shockwaves through the pussified media by calling for a return of the “manly man”. Earlier this week, in response to celebrity singer/actor Harry Styles wearing a dress, Owens tweeted:

“There is no society that can survive without strong men. The East knows this,” Candace wrote on Twitter on November 14. “In the west, the steady feminization of our men at the same time that Marxism is being taught to our children is not a coincidence. It is an outright attack. Bring back manly men.”

Owens expanded upon her statement, saying “Since I’m trending I’d like to clarify what I meant when I said ‘bring back manly men’. I meant: Bring back manly men. Terms like ‘toxic masculinity’, were created by toxic females. Real women don’t do fake feminism. Sorry I’m not sorry.”

With over 2.7 million followers on Twitter, she got over 65,000 retweets and 115,000 likes on the statement. It’s a statement I can absolutely agree with, too. We are living in a world where the social media networks collude on what type of speech is permissible on their platforms, mainstream media networks collude on what headlines to run and which stories are allowed on their platforms, and politicians collude on which social constructs they want to attack as being racist, sexist, or offensive. Nothing, not even Rudolph the Red Nosed Reindeer, is safe these days. There is a full assault on everything we used to know; not just the America we’ve lived in, but the core societal and moral values we’ve lived by for hundreds of years. That includes gender roles, which some want to eliminate, or maybe even criminalize. Don’t believe me? Compare these two TV commercials for Gillette razors; one from 1989 and one from 2019.

Is it wrong to be attracted to women? Is it bad to approach an attractive woman in the street? Are our sexual preferences misogynistic? Or is it how we are actually wired as men? Corporate America, Big Tech, and the Mainstream Media want to soften us up. They want us to suppress our natural testosterone-fueled instincts to become weaker, more effeminate beings… likely so we become ripe for takeover when their timing is right.

See where this is going? These powerful entities want to control your thoughts, desires, actions and entire life. That starts with denying who we biologically are and what we biologically want. Masculinity breeds competition, which in turn inspires creation, invention and innovation. The desire to be the best and make the most money is what drives us forward. It makes us evolve. Sometimes I think the government would rather a bunch of fat, weak, lazy unemployed people living off the government until they’re 75 and then dying, just so they can control every aspect of the world around us. It’s a complete takeover plan, and it’s happening right in front of us.

So, what can you do? Strengthen your body, mind, and spirit. Go to the gym. Take up a martial art. Buy and train with a weapon. Watch independent news sources. Read books on creating a self sustaining lifestyle. Question the narrative. Get involved in your local community. Above all, mentor a young boy or girl. Teach them the right way to live. Guide them around the far left indoctrination happening in our schools. Reproduce. Have lots of kids that you will raise the right way. The only way to change the ending to this story happens at the grass roots with each and every one of you.

Masculinity is Not a Crime.